Welcome to the October 2012 Carnival of Natural Parenting: Instilling a Healthy Self-Image

This post was written for inclusion in the monthly Carnival of Natural Parenting hosted by Hobo Mama and Code Name: Mama. This month our participants have shared confessions, wisdom, and goals for helping children love who they are. Please read to the end to find a list of links to the other carnival participants.

When I was growing up, “self-esteem” was a huge deal. Parents were exhorted to tell their kids how great we were. Not just smart, of course, but pretty, talented, strong, etc. Thirty years of research have shown that to be kind of a bad idea (click here for science!). Self-esteem is important, but no one gets self-esteem from a world in which every kid gets a trophy and we all know that we’re special snowflakes.

To be fair, my parents were not terribly over-the-top with the self-esteem thing, especially my dad. He still talks about the time I “won” first prize in my division at an elementary school science fair. My dad pointed out that no one else had entered…so I also came in last place. From an early age, my brother and I knew that a “Participation” ribbon that everyone got was meaningless. My parents didn’t ever try to change our minds about that.

I believe that kids develop a positive self-image by actually achieving things–by facing a challenge and overcoming it. I believe the science that says that kids who think of themselves as “smart” actually avoid challenges, because if they fail, then they’re not smart anymore. Similarly, I know kids who use the fact that someone has labeled them “dumb” or “lazy” to just quit trying.

The problem here is that adjectives are hard to change. Your eyes are blue. You’re good at math. It’s just part of your state. What you can change, though, is how hard you work and how willing you are to accept a challenge. Kids who think of their intellectual capacity as a fixed quantity tend to avoid challenges.

I’m also not a big fan of the way kids who are overpraised look to an adult for evaluation all the time. I’ve had the experience of teaching elementary school kids and seeing them complete a drawing and then look to me, as if to say, “Is it good?” I confounded a number of them by saying, “What do you think of it? Which part was the hardest? What is your favorite part?” Lots of them had been so used to having a parent or teacher tell them what was good about their own work that they didn’t really know how to analyze it. 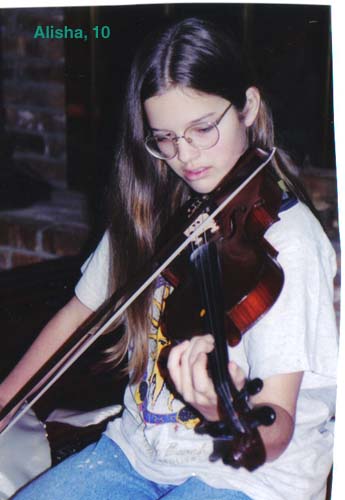 As a kid, I played the violin. I had this friend, Alex M., who also played the violin. She was way, way better than I was, even though we started playing around the same age. I remember telling myself that this was because she was super talented, and I wasn’t. I still think that’s a little bit true–I marvel at my musician friends and how they can really understand the deep structures of the music, how they can make the tiniest adjustment and change the whole thing. However, I also know that it’s not quite true. Alex worked much, much harder than I did. She practiced for several hours every day; I rarely found the motivation to do more than the hour that my teacher required. She sought out other musicians and opportunities to play; I was pretty shy about getting my instrument out in front of people (because I wasn’t that good, because I didn’t play that much). Telling myself that Alex was better because she had some innate gifts was really an excuse, and maybe I even knew it then.

It is this memory that makes me determined to avoid using adjectives with Silas, and to focus instead on the verbs. I don’t say, “That’s a pretty picture,” or “You’re a good artist.” I say, “You made lots of circles in this picture” or “You used leaves as brushes. What a neat idea!”

What makes this hard is, let’s just be honest here, he is smart. At his two-year-old check-up, his doctor was asking me questions from a development check list. One of them was, “How large would you estimate his vocabulary to be?”

“I have absolutely no idea,” I said.

“Two thousand?” I guessed. He looked at me like I was one of Those Moms, and maybe I am. Silas probably knows two hundred different animals alone. The kid can identify at least six different bird species that we have in our yard. He knows all the colors in a Crayola 16-pack. He can reliably count groups of six objects, can offer at least one sound for each of the ten letters that he knows, and uses similes. We are not a coaching/flashcard kind of family; he’s picked all this up on his own. Of course, he hadn’t said a word to the doctor, who, I am sure, did not believe me.

I know that he’s smart, but I try to avoid saying it, and I try to keep him from overhearing other people saying it. Instead, I focus on the work that he has done, which at his age, is considerable. Remember, only a year ago, he only said a dozen words. Now, it’s more than I can count. Early in the summer, he saw his friend Lillian (who is three years older than he is) jumping, and he couldn’t do it. He has spent the entire summer trying to learn how, and only recently mastered it. He could barely walk this time last year, and now he runs all over the place. That’s a ton of work and practice and determination, not just talent. He didn’t figure out jumping by sitting around, being innately good at it.

He completed a 20-something piece puzzle the other day, all by himself. I almost said, “You are so good at puzzles!” but I caught myself. Instead, I offered, “Wow, you did it all by yourself. Last week you couldn’t even do two pieces, and today you did all of them. You have been practicing.”

He applauded for himself and said, “Wow! You did it!” (Pronouns. Still working on pronouns.). Then he said, “Break it up? Do again?”

Visit Hobo Mama and Code Name: Mama to find out how you can participate in the next Carnival of Natural Parenting!

Please take time to read the submissions by the other carnival participants:

(This list will be updated by afternoon October 9 with all the carnival links.)

27 responses to “Carnival of Natural Parenting: Verbs vs. Adjectives”