I guess I went on a posting hiatus and missed posting my Easter pictures. Well, here we are.

Easter is possibly my favorite holiday because it’s so clean. There’s a secular/pagan sort of side of it, and there’s a very specific, not-for-people-who-just-want-a-cute-story religious side of it, and they sort of…independently exist. You don’t hear people arguing that we should be “putting the Christ back in Easter,” you know?

Plus daffodils, chicks, bunnies, lambs, chocolate! Little kids at church all dressed up! The moment when the pastor says, “The Lord is risen!” and everyone says, “The Lord is risen indeed!” like triumphant, nearly-unbelievable, amazing, astounding, news that we all have to keep affirming together. I played in the service, and it is such a total privilege to be up at the front where I can hear the chorus of “He is risen indeed!” Not to mention hearing the congregation singing with more joy than at any other point in the year. Easter is awesome.

I got my Easter present–both of my children actually wore their Easter outfits from last year (Silas, last year, refused to wear his until “Valentine’s Day”).

I took it on my phone during the service because it was an Easter miracle (and I accurately predicted that it wouldn’t last).

As for the kids, they were, as usual, spoiled completely rotten. This is what having a literal dozen aunts and uncles, as well as three sets of grandparents: 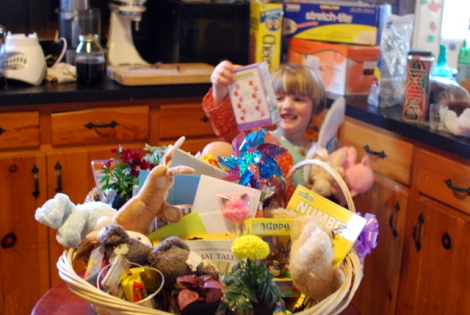 I also put all of their toy bunnies in and around the table, so it looks like even more than it was—but it was PLENTY.

They had goodies and entertainments from family and friends far and near. In addition to more candy than they’ve seen in I don’t know how long, they got lots of good not-candy presents, too: Marmee and Poppy gave them flowers and seeds, and Grammie and Grandpa Frisbee sent them pinwheels and coloring books. Grandpa Walter and Grandma Robba sent handmade backpacks that are just the right size for their little bodies. I got each of them a collection of Nick Butterworth/Mick Inkpen Bible stories (this one and this one).

Petra’s special gift from us was some nice wooden blocks, since she’s so very into the set that we have, which contains blocks that belonged to my grandfather (and maybe a few from his father?), my mom and uncle, my brother and me, and now my kids.

We had one very special gift for Silas: a doll. At Christmas, he asked why everyone gave Petra doll things, and no one gave him any dolls. And Petra ended up playing with some of his Christmas presents, including a particularly complicated train set, much more than he did. He’s been saying since then that he wished he had his own doll. I wasn’t sure how serious he was about the idea, so I took a doll that Petra never, ever plays with, gave him a new outfit, and put him in Silas’ Easter basket, along with a note. 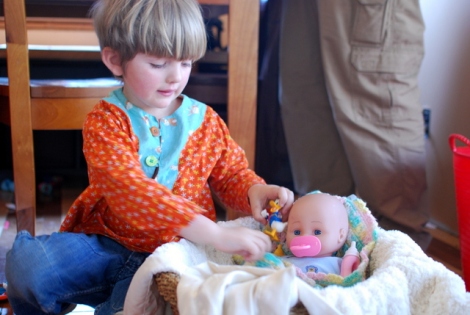 When I saw how much Silas loved having his own baby doll, I sort of wished I had splurged on a higher quality one, like Petra’s Corolle doll. Those take a beating…I’m a bit concerned about the day when Baby Sam loses an arm. But for now, Silas is enjoying having his own baby to play with.

The other Very Special Present was from Aunt Katie. She made the kids an awesome theater and collection of peg dolls for Christmas, which they play with constantly. I saw that some folks on Etsy sell Frozen character peg dolls, and I asked Katie if she could make some.

She could and she did, and they were BEEEEEYOOOUTIFUL.

So the kids played happily, and we all celebrated together, and Easter was gorgeous. The end.