Several years ago, I was playing Apples to Apples. The adjective to match was “scary,” and the “judge,” a young woman majoring in mathematics, chose “feminists.” I said, “I’m a feminist, what’s scary about that?” Another player, also a woman, who was in her 50s and had spent a long time working as an engineer, said, “Are you wearing a bra?” as if to imply that wearing a bra makes one NOT actually a feminist (not that it matters, but I was. Wearing a bra, that is).

I wish I had had the presence of mind to respond to her as Caitlin Moran would: “What part of liberation for women is not for you? Is it the freedom to vote? The right not to be owned by the man that you marry? The campaign for equal pay? Vogue by Madonna? Jeans? Did all that stuff just get on your nerves?” I was so flabbergasted that all I could muster was that feminism is about a lot more than underwear.

And now, there’s nonsense like this article from Slate, an online magazine I usually respect. The argument the writer makes is that “natural parenting” is incompatible with feminism. She writes about the “new, upper-middle class trend of naturalistic mothering (often incorrectly called ‘parenting,’ to conceal that fact that it’s mothers who have to step up more to meet demand).” This article pisses me off so much, I can hardly even think. Choosing to parent my children a certain way does not make me any less of a feminist. Sure, if someone, like, say, my husband, were to require me to practice this particular style of parenting, making some argument about my duty as a woman, that would be anti-feminist. Feminism is, as bell hooks says, for everybody. It’s about choices. It’s about saying that a woman can self-actualize however she wants, whether by becoming the CEO of Yahoo! while pregnant or by homeschooling her children and canning food from her garden. It’s also about saying that a man who chooses to be a stay-at-home dad is not less of a man. 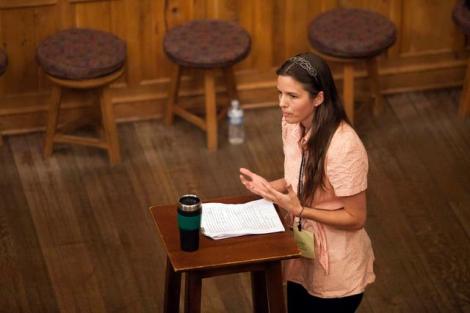 This is what a feminist looks like: Presenting at an academic conference while Silas was home with JC.

Feminism is what happens when I make an informed decision about how a baby is going to get out of my body–for example, on the timetable my female body decides is right, and not the timetable decreed by some (mostly male) hospital administrators who have to keep enough beds open–and my husband says, “If this is how you want to have our baby, I will support that.” If I felt coerced into giving birth naturally, on my bedroom floor, without so much as an Advil for the pain, sure, that’s anti-feminist. That’s yet another way of turning my body into an instrument of someone else’s priorities. If, instead, it happens as it did, as an empowered decision to trust that God designed my body to do something amazing, then I am just one more link in a chain of feminists stretching back a hundred years and a bit more. 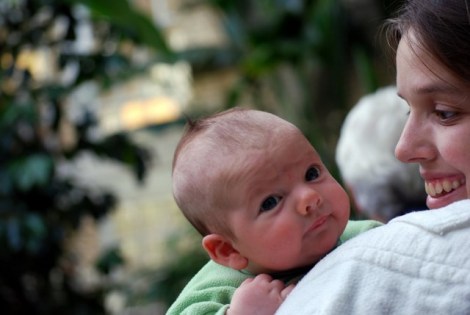 This is what a feminist looks like: Burping Silas after nursing him at the National Botanical Gardens, following his first political rally.

It’s called attachment parenting because it is about parenting. My husband does every “attachment parenting” thing that does not require a vagina, a uterus, and/or functional mammary glands. We’re pretty good at co-parenting, although he isn’t so awesome at the whole waking-up-in-the-middle-of-the-night bit (due to a medical problem, not a Y chromosome). Dr. Sears, in The Baby Book, advocates “fathering to sleep,” where a dad wears his baby in a sling and hums and rocks until the little critter finally falls asleep. He actually says that men, because of their deeper voices, can sometimes do a better job of getting baby to sleep than the mama can. We’ve certainly found this to be true. JC still has an easier time getting Silas to sleep than I do. 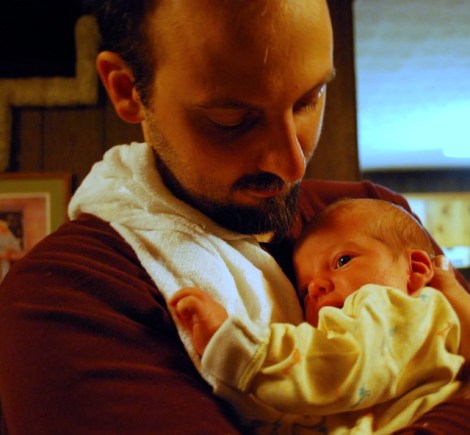 This is what a feminist looks like: cuddling Silas before bedtime.

Dr. Sears also strongly advocates that mothers stay home to care for their children, even if this means having to borrow money to get by. I think it’s a good idea for a parent to be present for their child a lot of the time, but I don’t agree that it must be the mother. Also, I think that childhood poverty is probably significantly worse for a kid than day care. Feminism doesn’t mean slavish adherence to the proclamations of a guru. Quite the opposite, I’d say.

JC has helped Silas with elimination communication about as much as I have–and yet, in the article, the author describes this as “the diaper-free movement that functionally requires women to hold their babies over a toilet all day” (emphasis mine. I’m also going to put together another post about EC soon, because for any parent who practices it, male or female, it really does not at all involve holding the baby over a toilet all day. This is a misconception I read all over the place, usually asserted by people who haven’t tried it.).

JC has opted to skip out on a certain kind of promotion/raises track so that he has the flexibility to spend more time at home, caring for our children. I respect and support that decision–just as he respected and supported my decision to work full-time during our son’s first year. 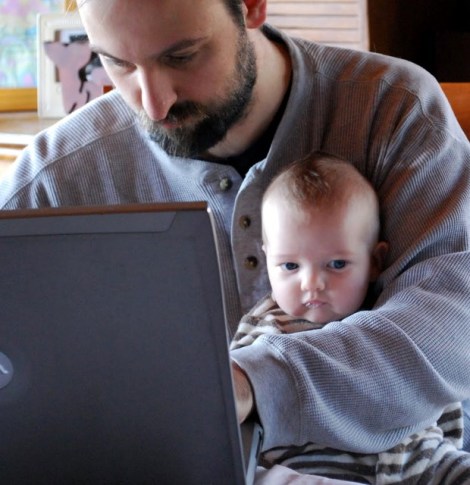 This is what a feminist looks like: Jiggling a lap baby while managing a roll out. Like a boss.

About a year before I got pregnant with Silas, as I was getting ready for my first stint with Pigeon Creek Shakespeare, in Michigan, one of my grad school professors asked me if I had any kids. Before I could even answer, he said, “Oh, wait, of course not. If you had kids, you wouldn’t be doing this Michigan gig.” I was so shocked that he said that that I couldn’t even summon the presence to ask him if he would have said that to a man (Hint: he wouldn’t have.) Here, I would include a photo of myself solo parenting for two months, almost exactly two years later, during my second show with Pigeon Creek, but my hands were too full to get that picture.

Feminism is about not necessarily choosing between out-of-the-home work and stay-at-home momming. It still requires choices, of course (let’s not kid ourselves about having it all), but it creates a paradigm of seeking a third way.

When I left full-time employment, it wasn’t exactly to spend more time with Silas. It had more to do with wanting to explore other career opportunities, while making way less money. JC just said, “What ever you choose, I’ll support you in that. We’ll make it work.” He didn’t say, although many other people did, that he felt like the right decision was for me to stay home with our son, because I’m the mom. 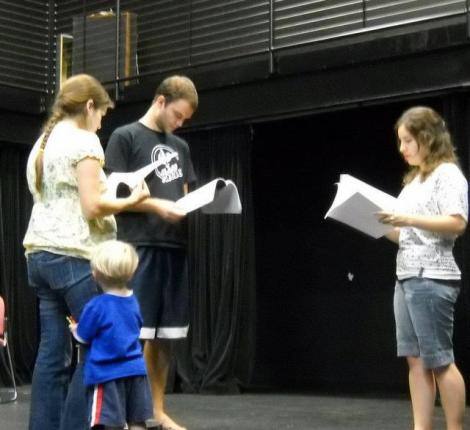 This is what a feminist looks like: Directing a play, while eight months pregnant, with a toddler assisting.

I breastfed my son as long as it was working for both of us, and plan to do the same with our new baby, but not because anyone made me. Maybe it was more of a feminist rejection of all those men in suits on Madison Avenue trying to convince me that male scientists had concocted a formula that was better for my baby than anything my female body could produce. That sounds like a feminist high-five to me. More likely, it’s because I’m too lazy to sterilize bottles all the time.

My son sees my husband cook dinner half of the time (we have a schedule). He understands that Daddy does the laundry almost as much as Mama does, and that Daddy is better at loading the dish washer. He sees me do most of the minor electrical work in our house, because I’m more stable on a ladder than JC is. He saw me take equal turns with JC wielding a chainsaw during our derecho clean-up. When he’s bigger, he will have to pick from the same bucket of chores as any sisters he has. When he graduates from high school, I want him to know how to cook and clean and do his own laundry so that he doesn’t have to rely on a woman to take care of that stuff. I want Silas to grow up to understand that feminism means that men and women can do most of the same things, and it’s what they choose to do that matters. 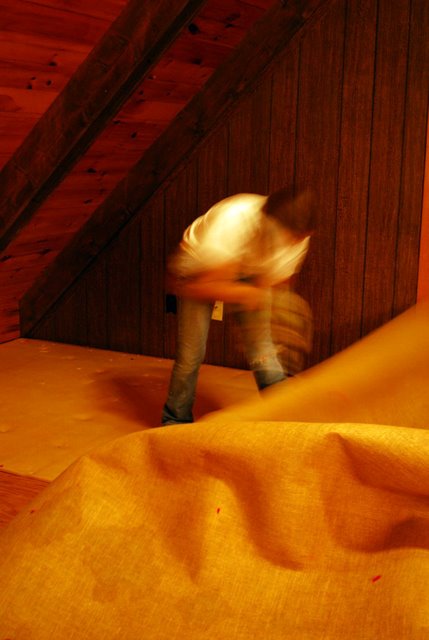 I wish I had a picture of myself using a pneumatic nailer to lay flooring at 37 weeks pregnant, because that is what a feminist looks like. Instead, here’s the beginning of that project–ripping out 400 pounds of red shag carpet.

We’re not magically egalitarian around here. I still handle our social calendar, am more likely to notice that the bathroom needs cleaning, and send thank-you notes and birthday cards. We’re aware of these tendencies, though, and we talk about them and try to correct them. If things get too lopsided, I challenge JC to a month of ChoreWars, and that, by making the inequities trackable, fixes things. We are both committed feminists, and we manifest that in our home by naming our biases and refusing to let them power our decision-making.

Welcome to the third wave, people.

10 responses to “This Is What a Feminist Looks Like”